We join Peter Baker in his campaign back into the match fishing scene. Not only is it a new venue for him, but also his first team match. How will he fare against the seasoned match anglers?

I thought I would take a slightly different approach to this blog, with this being not only a match but a team match I am going to take you through my thought process throughout the match.

Cat rough Fishery is a 2.5 acre sheltered lake in a hollow surround by woodland. The lake itself is kidney shaped water which is packed full of features which include lily pads and rushes. A very stunning lake especially first thing in the morning when the sun is coming up and the mist is just settling.

After checking the weather and finding it was going to be a rather warm day, I knew I wanted to draw the shallower part of the lake. I wasn’t too sure about tactics as I would decide this when I get to my peg. The other team drew the even number pegs, this meaning the peg I was eyeing up was now not an option but my second choice was still there. Pulling out peg 13 out of the bag (this being my second choice). This was just over halfway along the left hand side looking at it from the car park.

My bait of choice would be hard pellet (2mm micro, 4mm and 6mm), Sonubaits band’um dumbell wafters (6mm, 8mm and 10mm) and a pint of white maggots. Yes I know I didn’t bother taking meat or corn to a match, but to be honest I’ve been experimenting on my take of the pellet waggler which isn’t as effective with meat and corn. To add to this I have mixed a small amount of groundbait to use with a method feeder due to only being allowed a minimal amou t.

So why did I choose them baits?

All the information I had on the Fishery was that it has a fairly decent stock of Carp and can produce big nets of silvers. Pellet for me is an essential bait at any venue, not only can they be used with a feeder, pellet waggler and cupping in but they make a fantastic hook bait. They are loved by both Carp and silvers.

Dumbell wafters have to be one of my favourite hook baits. I use these with pellet bands on either the method feeder or with a pellet waggler which I will go into more detail later.

And finally maggots, well you can’t really go wrong with a couple of maggots on the hook. With it being a warm day, if the Carp weren’t playing then the quickest way to build a weight is to catch silvers on the drop.

After setting up and preparing all my bait, I’ve only got ten minutes before the start o the match. We are fishing 9:30am to 2:30pm so a total of five hours. Using my final ten minutes before the all in, I used my time to watch the water. On my short line, a decent size carp was cruising back and to in front of me.

The sound of the “all in” echoes around the lake. Now my plan was to start was to cast a method feeder over to the pads but…..

The Carp was still cruising in front of me and my normal opportunist approach had taken the better of me. I had very quickly just before the start shortened the pellet waggler rig to just a foot deep and swapped to a 10mm white wafter. Before the echoing had stopped I cast a couple of feet in front of the Carp and twitched it back kicking the white wafter right into the coming path of the Carp. It was less than ten seconds since the match had started and I was into a decent mirror. Less than a minute into the match and it was in my landing net.

I know the average size of the Carp here are around 3lb, so landing a bonus fish of 9lb in the first minute was a result. I wouldn’t normally do this but I took the opportunity and got the first fish of the match out of 20 anglers.

The first hour went as expected. Looking around the lake the few of us in the shallows were getting steady bites and those in the deeper water very slow. I have been casting a method feeder tight to the far pads while I build my other swims up. Every 30 seconds I was pinging out 3-4 6mm pellets on my pellet waggler line and slowly introducing micro pellet and maggot in to my left margin. The bites slowed down so a quick change of hook size from a 14 down to a 16 paid off and got me quicker bites.

Looking around the surge of bites earlier had definitely slowed down now. After catching a few silvers from the margin swim I decided to cast the method back out in the hope for a bonus fish. It worked, 2 Carp were in my net with in 10 minutes. The method feeder went straight back out but nothing. Throughout this I am still putting out pellet on my pellet waggler line, and then I start getting line bites. It’s time to convert the liners into bites.

One thing that I have learnt is when getting liners fish closer in. Its a simple change but gets overlooked.

My slightly closer in line would be where I have been constantly putting small amounts of pellet. Armed with my pellet waggler I put a few more pellets out and cast straight on top, 30 seconds later a few more pellets went in and gave the float a twitch and the rod wrapped round.

The Carp had finally moved into my swim, but it wasn’t only the Carp that moved in so did the ducks. Luckily I managed to get a fair few Carp in the net before the annoying feathered things started diving and clearing my swim of fish.

Only 90 minutes left of the match, I know I haven’t got enough to take first place but I also knew I wasn’t doing bad so decided to push to win the section. Even the section win would be a close one as I had a similar catch rate to the person to my right. Watching my pellet waggler line which stopped producing, all of a sudden it was like a Jacuzzi. All the pellets that were missed up in the water have pushed the fish down. As there was bait there I didn’t want to introduce too much more. I swapped my method feeder for a lead and cast over. Straight away the tip wrapped around and I was back into a fish. Doing this resulted in another 3 Carp.

I packed away very quickly as I was assisting with the weigh in. It was time to see how we all got on. I couldn’t see most of the other half of the lake during the match so I had no idea how they got on. We started at the deeper end of the lake, which to my surprise was only producing small nets of silvers with the odd Carp. That was until we got to peg 7, James who was on the same team had been catching consistently at a steady rate. This was the first decent weight in the match and weighed in at 41lb 13oz. This was definitely what we needed to be in for a chance. We then went to peg 8, this was the hot peg that everybody wanted to draw as you had the whole bank and bay to yourself. This definitely was the hot peg producing the biggest weight of the match at 86lb 10oz to the other team.

From the start it was predicted that the bigger weights would come from the shallows, and that’s exactly what happened.

Finally it was my turn to weigh in. The needle rested at 34lb 13oz. I was happy with this but was it enough to win the section. The next weigh in would answer that.

How did we get on as a team?

You know what? I kind of enjoy this match fishing business. Bring on the next one.

But before then, it’s time to celebrate our first match and team win of the year. 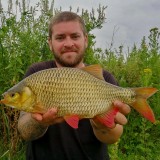